Leaving everything behind: the refugee crisis

In northern Greece in April my wife, a neighbor, and I were volunteers serving Syrian, Kurd, and other refugees fleeing their war-torn homes, seeking to get to middle and northern Europe. Macedonia had closed its border with Greece just a few weeks prior, causing there to be a daily growing accumulation of north-bound refugees when the pipeline was blocked. Greece, with little aid from other countries, reacted by establishing camps for the refugees. Greece, by the way, has risen to this unexpected problem despite its horrid economic state, perhaps the worst in Europe. 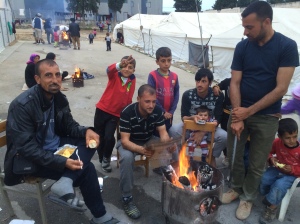 Every evening small groups of refuges would start fires, to sit around and socialize.

We were assigned to one of the new camps, Diavata, near the second largest Greek city of Thessaloniki. Our camp held about 2,000 persons of ages from infancy to advanced old age, though the entire camp system so hastily built may have held 50,000. Virtually all “our” refugees spoke Arabic; very few spoke either English or Greek. They were housed in tents and in hard tent-like family domiciles, fed by an outside vendor, and furnished water by either the European Union or the United Nations High Commissioner for Refugees. We volunteers distributed water, clothing, shoes, and hygiene supplies; less frequently we helped in building tents. Interaction with the refugees was encouraged, so we willingly (and, to us, meaningfully) and across the language divide, just visited with refugees themselves. The latter may have at any given time involved playing with children or having tea with grownups.

Children in refugees’ tent. I’d been invited in for tea.

In person-to-person interactions we heard frightening, saddening, harrowing tales of homes bombed, bodies damaged, families ripped apart, dangerous boat crossings (to get from the Turkish mainland to offshore Greek islands), long walks, scarce water along the way, and the fears of never completing their journeys. The poignancy of absorbing these stories from persons with recent and personal involvement in these serial disasters was touching. Largely, they were appreciative of the work we were doing; a lesser number were angry, though not combative. Children were needy and largely undisciplined, though very few were—in common parlance—“bad” kids.

It goes without saying that this experience was one we will cherish for years. We came home with heavy hearts and a deeply personal exposure to on-the-ground aspects of political conditions so ravaging as to spawn desperate emigration. On a more conceptual level, we came back with greater awareness of—though certainly not solutions for—the heartbreaking dilemma of masses forced by violence to exchange a culture they know for one they don’t.

I am a U. S. citizen living in Atlanta, Georgia, having grown up in Chattanooga, Tennessee, and graduating from Chattanooga High School. I served in the Electronic Security Command of the U. S. Air Force before receiving a B.S. degree in business/economics and an M.Ed. in educational psychology, both at the University of Tennessee at Chattanooga. I then completed a Ph.D. in clinical (and research) psychology at Emory University. I have two daughters and three granddaughters. An ardent international traveller, I have been in over 70 countries for business and pleasure. My reading, other than novels, tends to be in history, philosophy, government, and light science. I identify philosophically as a secular humanist, in complete awe of the universe including my fellows and myself. I am married to my best friend, Miriam, formerly of the United Kingdom and Canada.
View all posts by John Bruce Carver →
This entry was posted in Politics and tagged men, men boys fire. Bookmark the permalink.