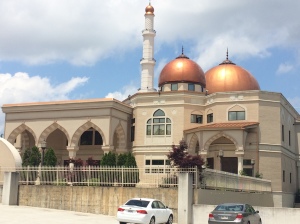 I was asked to subject Islam to the same degree of critique I aim at Christianity. Although I’ve frequently explained that Islam is already included in my criticisms of “Abrahamic religions” (or more broadly, “theistic religions”), I must admit having aimed more specific barbs at Christianity than at Islam.

(The picture is Al-Farooq Masjid of Atlanta, where my wife and I were treated to a cordial and informative orientation to Islam, allowed to be present during one of the five calls to prayer, and presented with two different English translations of the Quran.)

That practice doesn’t arise from wishing to give Islam a pass, nor is it due to thinking Islam imposes fewer harms on humanity than Christianity. From my humanist perspective, current Islam is immeasurably worse than current Christianity. (By “current,” I mean to exclude Dark Ages Christianity and Islam’s milder periods.) Further, having spent my life more among Christians than Muslims, I’ve been more affected by them. Due to my greater intimacy with Christian dogma and behavior, concrete examples within Christianity to illustrate this or that point are more accessible to me.

In order to address my own ignorance about Muslim beliefs, behaviors, and societies, I’ve taken a closer look at Islam in the past few years. I read the Quran as and books critiquing the faith and its history. I visited a mosque for an orientation and just last week completed a book on the politics of Middle Eastern Islamic countries, especially events leading to and following the Arab Spring. None of that qualifies me as a scholar on the subject, barely as an introductory student.

Even then, my mindset in this pursuit has largely focused on the meaning Islamic features hold for me or for Western democracies, an ethnocentric viewpoint not conducive to unbiased learning. Does the Quran really direct Muslims to kill infidels? Is Islamic extremism only a perversion of Islam, not the real thing? Are Allah and Jehovah the same God? Does Muslim immigration in America and in Europe foreshadow a downhill path to shari’ah law? Do these and similar Western worries arise out of actual possibilities or from our unschooled fears?

Obtaining a better grasp on such issues calls for knowing where and when Islam came about, the schisms that occurred within the faith, Muslim attitudes about Jesus, the relationship of Muslim sects to each other, their differential roles in today’s Middle East, and other comparisons between Islam and Christianity. While I don’t now—and possibly never will—have an authoritative understanding on this subject, I can share a few beliefs I’ve acquired.

First, Islam is as devoid of evidence as Christianity. I see no reason to think one is more likely to be true than the other. Second, while there are Muslim scholars and some Islamic apologetics, Islamic academic criticism is not nearly as rigorous among Muslims as that in Christianity. Third, being opposed to separation of civil authority and religion, Islam is theocratic in the extreme. Fourth, while charity is important enough to be one of the “pillars of Islam,” the charitable attitude is not extended to religious liberty. Finally, the storied commands and acts of Islam’s Allah are no more cruel than those of Christianity’s Jehovah.

These are opinions, however, about a huge category of human beings. They cannot be true of all individual Muslims, just as such sweeping descriptions would not be true of all Christians. To be sure, there are Muslim radicals willing to commit heinous acts in the name of Islam. And there are millions of Muslims disinclined to criticize those acts. It is obvious that there are fewer such radicals given to heinous acts in Christianity. While the period of Catholic ascendancy showed that Christians could be similarly violent, the Enlightenment succeeded in introducing enough freethought and humanitarianism to lighten those Dark Ages. Islam had no such opposition to its philosophical hegemony, so we can see reflections of our former selves in Islam’s present worldview and mistreatments.

My next post on this topic will continue the discussion; it may or may not lead to a third. I shall not attempt to “teach Islam,” for I’m not qualified to do that. The most I feel sufficiently knowledgeable to do is merely to share my own learning, musings, and questioning.

I am a U. S. citizen living in Atlanta, Georgia, having grown up in Chattanooga, Tennessee, and graduating from Chattanooga High School. I served in the Electronic Security Command of the U. S. Air Force before receiving a B.S. degree in business/economics and an M.Ed. in educational psychology, both at the University of Tennessee at Chattanooga. I then completed a Ph.D. in clinical (and research) psychology at Emory University. I have two daughters and three granddaughters. An ardent international traveller, I have been in over 70 countries for business and pleasure. My reading, other than novels, tends to be in history, philosophy, government, and light science. I identify philosophically as a secular humanist, in complete awe of the universe including my fellows and myself. I am married to my best friend, Miriam, formerly of the United Kingdom and Canada.
View all posts by John Bruce Carver →
This entry was posted in Church and state, Politics. Bookmark the permalink.