Due to a 1960 movie, Inherit the Wind, many Americans are familiar with the 1925 trial of high school teacher John T. Scopes in Dayton, Tennessee, just north of Chattanooga. Because Scopes had violated the state law against teaching Darwinian evolution in the public schools, the event became known widely as the “monkey trial.” It was an all-star event, with William Jennings Bryan and Clarence Darrow—each with a nationwide reputation—arguing for the prosecution and defense, respectively. As you’d guess, feelings ran high against Scopes and, as local emotions soared, against Darrow as well. Bryan won and Scopes was fined $100, though in later years the verdict was reversed.

The proud and thankful Christian majority of Rhea County was pleased in 2005 that local Bryan Baptist College, an evangelical school, dedicated a statue of Bryan on the courthouse lawn. (The college’s mission is “for the purpose of establishing . . . a university for the higher education of men and women under auspices distinctly Christian and spiritual, as a testimony to the supreme glory of the Lord Jesus Christ, and to the Divine inspiration and infallibility of the Bible.”) There was no statue of Darrow . . . 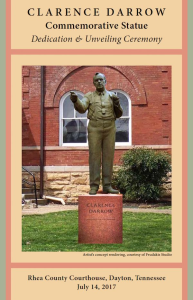 The new statue was dedicated at the same old Rhea county courthouse where the trial had been held and where Bryan’s likeness had stood for 12 years. The Freedom From Religion Foundation (FFRF) spearheaded the effort to honor Darrow. The sculptor commissioned to create the statue was, with pleasing serendipity, already a Darrow fan: well-known sculptor Zenos Frudakis.

Opinions in Dayton are considerably less negative than in years past, but are still mixed. It is informative that Bryan College in the early 2000s was forced to stop its practice of deploying students to teach religious classes in local public schools. Further, the College required professors to sign a statement of beliefs that declared Adam and Eve to be “historical persons created by God in a special formative act.” Though I’ve no data specific to Rhea County, a 2015 Pew Research Center study found that 34 percent of Tennesseans still reject evolution. Now nearly a century after the Scopes trial, an aversion to scientific findings continues to shape American public policy.

In Dayton’s fundamentalist environment, it is impressive that the Rhea County Historical & Genealogical Society helped make the new statue’s placement possible. Moreover, Tom Davis, himself a creationist, had been president of the Society when the Darrow statue plan was approved. As the project came to fruition Friday and despite rumors of planned violence by a few fundamentalists, the July 14 dedication was peaceful.

My wife and I were privileged to be part of the previous evening’s celebration in Chattanooga where we met the sculptor, the FFRF leadership, and other guests of the Freedom From Religion Foundation (in which I am a Life Member).

I am a U. S. citizen living in Atlanta, Georgia, having grown up in Chattanooga, Tennessee, and graduating from Chattanooga High School. I served in the Electronic Security Command of the U. S. Air Force before receiving a B.S. degree in business/economics and an M.Ed. in educational psychology, both at the University of Tennessee at Chattanooga. I then completed a Ph.D. in clinical (and research) psychology at Emory University. I have two daughters and three granddaughters. An ardent international traveller, I have been in over 70 countries for business and pleasure. My reading, other than novels, tends to be in history, philosophy, government, and light science. I identify philosophically as a secular humanist, in complete awe of the universe including my fellows and myself. I am married to my best friend, Miriam, formerly of the United Kingdom and Canada.
View all posts by John Bruce Carver →
This entry was posted in History, Science and society. Bookmark the permalink.