Slightly over half the world’s religionists are Muslim or Christian, each powerfully motivated by belief that a loving/vengeful god entices with paradise and threatens with horror. To each camp, the other is anathema. Adherents of each are convinced of a deity-ordered duty to rid the world of the opponent. As history attests, these factors constitute a formidable, often brutal mixture. Much of Christianity, with sincere faith, has endorsed mild repression to downright cruelty. Much of Islam, with equally sincere faith, has advocated a similarly ruthless zeal.

I’ve addressed how antipathy between religions continues at successive, subordinate levels. Believing sincerely that divinity is on one’s side energizes not only the top tier of opposition (for example, Christianity vs. Islam), but smaller divisions as well (Sunni vs. Shi’a; Catholic vs. Protestant), then to further demarcations (Hanafi vs. Sufism vs. Wahhabism; Methodist vs. Mormon), each just as earnest and often as rancorous as the next. In the West in the 17th and 18th centuries something new happened, the Enlightenment—philosophical inquiry not subservient to theology. The wisdom of philosophers like Locke, Kant, Rousseau, Hume, Spinoza, and Smith inspired an integrity of thought that could please disestablishmentarian and passionate religionist simultaneously.

North America’s fledgling, emerging country was ready-made for a breakthrough relationship between church and state, and thoughtfully adopted a Constitution that assured unhampered religious freedom without religious control. Government’s domain is secular control—though within bounds set by the electorate. Churches’ domain is religious conscience—answerable neither to the state nor to anyone except those who’ve chosen to assemble together. (“Church,” of course, includes synagogue, temple, and mosque.) Still, broad concepts, for all their utility, require specification of their specifics.

The National Day of Prayer
God and Government United

Churches must submit to government regulation of their fire prevention, payment to creditors, registration of vehicles, asbestos insulation, and use of force. The state must govern churches as it does everything else, while refraining from favoring one religion or opinion about religion over another, and interfering in or prescribing worship. Gray areas like protection of children, church engagement in electing political candidates, secrecy of church finances do arise, and further calibration is needed, sometimes requiring judicial involvement. The outcome should be that we have a government that protects all faiths while promoting none. No matter what each believes about anything, we  should all be equal in the eyes of government.

Our Constitutional bargain, simple and fair as it seems, has been under attack—and therefore a source of intermittent unrest—since the beginning of our republic. There have been riots between Catholics and Protestants, civic action between Christians and Muslims, proselytization of public school students, destruction of synagogues, Christian ornamentation of public property, government promotion of fundamentalist Christianity, governmental actions relying on Christian dogma, and millions of such entanglements daily. Christians call on government to, in effect, declare it the only true religion. Government officials, sworn to protect the Constitution, regularly curry favor with Christians for their personal political gain. And, of course, the preference can be quite pointedly targeted, so that “Christians” frequently turns out to be some Christians.

So far though, freedom of worship and freedom to convince others of their rectitude has not been enough to satisfy all religionists. They wish also to arrogate the power of government in their behalf to the exclusion of competing views (meaning not only nonbelievers, but believers of opposing faiths). The energizing of the Christian right over the past few decades has not been in the interest of religious liberty as it likes to portray, but in wresting favor from government, that is, stealing from a population of mixed opinions about religion, including theirs. The revisionist doctrine that America was founded as a “Christian nation” turns history on its ear.

Individual Christian candidates for office are thought to be more honest and of better intent than non-Christians despite facts to the contrary. Mechanisms are available to enable pious posturing, such as events like the National Day of Prayer [see “National Prayer Breakfast,” Feb. 9, 2015 and “Our National Day of Prayer,” May 1, 2014]. No politician risks omitting “God bless America” to conclude a speech. Consequently, nonbelievers in elected positions are quite few, far below the proportion of Christians in the electorate. Piety is easy to fake and, on this matter, religious people are easily duped.

There is nothing new about sacrificing the principle of church-state separation; even if poorly maintained it has served the country well. Now comes the Trump Administration eager to pretend piety with a vengeance, the president himself meeting repeatedly with groups seeking fundamentalist Christian hegemony. The president, among other similar actions, prohibited the IRS from threatening the tax-exempt status of any religious organization that actively lobbies on behalf of a political candidate, even though the so-called Johnson Amendment makes that unlawful [see “Church donations trump secular ones by IRS,” May 10, 2017]. In 2017 he instructed federal agencies to “take the broadest possible interpretation of religious liberty” when enforcing federal laws.

Consistent with the White House position, just last month Attorney General Jeff Sessions convened a “Religious Liberty Task Force” to help in that pursuit. (The term “religious liberty,” though in itself an honorable concept, has been hijacked by the Religious Right and its meaning reversed so that it has become Christians’ freedom to discriminate against groups they dislike and laws that they find inconvenient [see “So-called religious liberty bills,” Feb. 25, 2017 and “Legislators set to abuse religious freedom…again,” Jan. 17, 2018].) Sessions, who is fundamentalist himself enough to have been ejected from his conservative home church, actually quoted a Biblical reference to defend Trump’s treatment of children at the US-Mexico border. He announced that his task force is necessary to help save religious liberty because of the great danger of secularism to freedom. 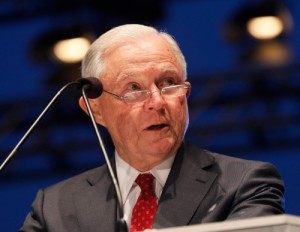 “We have gotten to the point,” Sessions said, “where courts have held that morality cannot be a basis for law, where ministers are fearful to affirm, as they understand it, holy writ from the pulpit.” These are ridiculous assertions. Morality is very much a basis for some legislation, but not specifically the morality of Session’s chosen dogma. Ministers in the United States are as free to preach what they believe to be holy writ as anywhere in the world. Is lying included in the moral code the Attorney General proposes for federal guidance in religion?

I have argued previously that secularists are far greater protectors of the principle of religious liberty than are either Christians or Muslims. While carelessness about separating politics and religion is not new, Sessions (and Trump) are advocating the fusion of patriotism and evangelical Christianity (known as “Christian nationalism”) to strengthen Trump’s evangelical base. When religious positions may actually be political ones, it is not surprising that political positions may be religious ones.

Governmental support for particular forms of Christianity are frightening even to many Christians; every step toward theocracy is a hollow victory, for it applies only to those specific religions or denominations in a government’s favor. American history, let alone other countries’, testifies to that shameful victory. Note these chilling words from Bryan Fischer of the American Family Association: “The purpose of the First Amendment is to protect the free exercise of the Christian religion . . . [The Founding Fathers . . . weren’t ] intending to deal with non-Christian religions.” One example, he claims, is Mormonism: “Mormonism is not an orthodox Christian faith. . . . the Founding Fathers did not intend to preserve automatically religious liberty for non-Christian faiths.”

Compare that sentiment that to the Virginia Statute for Religious Freedom drafted by Thomas Jefferson, which declared that “No man shall be compelled to frequent or support any” religion. It was guided through the legislature by James Madison, and later became a model for Constitutional language in the First Amendment. Due to the shoddy history of mixing government and religion, Article 6 includes a complementary sentiment that “no religious test shall ever be required as a qualification to any Office or public Trust under the United States.”

As Americans, we’ve been granted a great, historical birthright—freedom of belief, of worship, of conscience—but we have an ill-considered, foolish tendency to swap it for short term favors of religious privilege. Like a child who carelessly breaks a Ming vase—unaware of its value—religions are their own worst enemies with regard to valuing the principle of religious liberty enough to preserve it. And now, in exchange for partisan fealty, some Christian churches have actually been invited by government into politics.

I’ve given politicians and religionists a hard time in this post. But I don’t want to overlook the many religious persons of various stations in life who seem to “get it,” to understand that promoting their faith not only doesn’t need government assistance but is in fact corrupted by it (as is government corrupted by religion). Although their numbers are legion, here are three from a wide variety whom I’ve read and by whom I’ve been buoyed:

I am a U. S. citizen living in Atlanta, Georgia, having grown up in Chattanooga, Tennessee, and graduating from Chattanooga High School. I served in the Electronic Security Command of the U. S. Air Force before receiving a B.S. degree in business/economics and an M.Ed. in educational psychology, both at the University of Tennessee at Chattanooga. I then completed a Ph.D. in clinical (and research) psychology at Emory University. I have two daughters and three granddaughters. An ardent international traveller, I have been in over 70 countries for business and pleasure. My reading, other than novels, tends to be in history, philosophy, government, and light science. I identify philosophically as a secular humanist, in complete awe of the universe including my fellows and myself. I am married to my best friend, Miriam, formerly of the United Kingdom and Canada.
View all posts by John Bruce Carver →
This entry was posted in Church and state, Liberty, Politics. Bookmark the permalink.

2 Responses to Creeping toward theocracy