If there’s anything enigmatic about America’s experience of Donald Trump that is shared by both Republicans and non-Republicans, it must be the baffling nature of each side’s conception of the other side’s reasoning. Human beings have a great store of understanding, even empathy for each other’s thinking. Yet our advanced “theory of mind” capability seems in this case to fail us. I am not untouched; I’ve a frequently recurring quandary: what on earth are Republicans thinking?

I realize Republicans must think things just as unflattering about some of my views. But before I go further, I need to point out a difficulty about using the term Republican. I know they have to call themselves something, but Libertarian is already taken and National Socialist has an unpleasant reputation (due to the loathed S word?). Perhaps I should stop being so picky and just stick with Republican after all, though it does confuse me.

I’ve known Republicans. They stood for low or no deficits. They stood for free trade. They stood against “picking winners and losers” in the market. They stood for keeping government out of our personal choices. They stood for standing tall among the nations, representing stability, reliability, and being an international force for democracy. They stood—as did arriving Puritans—to make America a “city upon a hill.” On the other hand, maybe I just wasn’t paying close attention.

I used to agree with a good portion of Republican political philosophy. And whether I like the outcome or not, I’m a sucker for propositions based on truth and precisely reasoned, no matter their origins or results. Almost everything I hear from Trump fails on those scores and, increasingly, much of what I hear from his sycophants is similarly tainted. For example, here are a few comments that have come my way straight out of the Republican playbook within the past few weeks.

[1] Regarding Trump’s continual lying: “Politicians lie, including Presidents of the U.S., for example, (a) ‘I did not have sex with that woman’ and (b) ‘If you like your [current] health care plan, you can keep your health care plan, period.’” The Republican position is that these Democrat lies or purported lies are equivalent to Trump’s lies, and overlook that Trump’s lying occurs with dizzying frequency. But let me focus on these two instances cited by Republicans.

[1a] “I did not have sex with that woman.” That was definitely a lie and must be admitted to be so. Yet if all partisan identities are removed from the story, do Republicans really believe Americans—Republicans or Democrats—would argue that the severity of impeachment is justified for a behavior so common it likely occurs by Americans millions of time each day by persons considered upright, maybe even blameless?

[1b] “If you like your health care plan, you can keep your health care plan, period.” As it turned out, this intention of Obama did fail. A Republican could honestly say Obama was ineffective, didn’t try hard enough, or broke a promise. But no way is a campaign plank a lie in the normal way the word lie is used, even by Republicans. If, for example, despite trying as hard as possible, Trump’s great wall just cannot overcome opposition, does failing to build it constitute a lie? Of course not. We could establish a new standard of what counts as a lie, for example, anything a politician promised but can’t accomplish will be called a lie. But what you will have established is that every time a politician, no matter how honest, doesn’t achieve what he or she sets out to achieve constitutes lying. That’s a pretty useless redefinition of “lie.”

[2] “Because of my [Trump’s] policies, Black Unemployment has just been reported to be at the LOWEST RATE EVER RECORDED!” Nothing Trump says can be trusted as truth (I mean that literally), but as in this case the Republican reaction is to do just that, swallowing the Cool Aid on a regular basis. (If there were no Fox News, I wonder if Trump fans would have nothing to say.) Since Trump’s fans care little about reality, others are continually distracted by having to unearth the truth. Actually, black unemployment had been falling since March of 2010! Characteristic of Trump, he woke up on third base and claimed he hit a triple. Trump took full credit for “his” achievement of that falling black unemployment. Further, even then the rate was not the lowest ever recorded as he said, but the lowest in decades. As the Bureau of Labor Statistics chart below illustrates, the black unemployment rate has been in a years-long downward trend that continued under Trump. 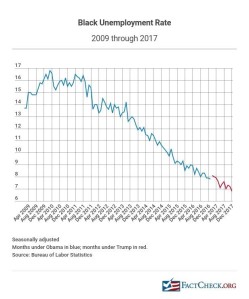 The black unemployment rate at Trump’s inauguration was 7.8 percent, the lowest it had been in nearly 10 years (not the lowest ever recorded, as Trump claimed) according to the Bureau of Labor Statistics. By the end of 1917, it dropped to 6.8 percent in December, the lowest rate since 1972 when regular tracing of unemployment by race began. However, the rate in the year before Trump’s presidency had dropped the same amount, and in each of the three years earlier fell 1.9% (2015), 1.5% (2014), and 1.8% (2013). Yes, the downward trend continued under Trump, but as a continuation of the previous fall and not due to anything Trump caused, a phenomenon hardly reflected in his tweet announcing the lowest rate ever recorded and due to Trump’s policies! Keep in mind that even if we can find similar self-serving misstatements by other presidents, the extensive number that Trump treats us to sets him apart from all others.

[3] “There was no collusion with Russia that affected the results of the 2016 presidential election (except by the Clinton campaign).” These Republican claims serve, I assume, to protect Trump from having to face the possibility that Russia won the presidency for him. But let’s look at them more closely.

[3a] It is possible—maybe even probable unless Russians were just ineffectively throwing their money away—to argue that thousands of Facebook (and other?) messages meant to stimulate Trump votes made a difference in the election (I have no evidence to make that claim). Maybe there was no effect of Russian actions. But to assert as fact that there was “no collusion” is to allege as a certainty that which is only an undemonstrated claim. Doing that is the moral equivalent of lying.

[3b] Notice the unrelated charge slipped in, muted by parentheses, that Clinton colluded with Russia. Where did this claim come from and why? Was it to have made any Trump campaigners’ collusion, if found, look less reprehensible? Frankly, I don’t know. (Trump’s has a quasi-paranoia habit of charging or blaming others with offences he himself has committed. Republicans pick up his drift and adopt it for themselves.) There is no collusion by the Clinton campaign supported by evidence. But this is the kind of slippery construction that shows up repeatedly in Trump’s and Trumpists’ speech, much like making an allegation without actually making an allegation, like the old saw, “Have you stopped beating your wife?”

The futility of having an untrustworthy president

I began this post by marveling at Republicans’ bizarre thinking during this presidency. I’ve never thought Republicans were evil or unintelligent. (I’m overlooking Newt Gingrich’s 1990s conversion of his party from dutiful governing to intra-congressional warfare, clearly damaging my commitment to internal bipartisanship!) I’ve spoken in this post to a few of many actual Republican contentions. Obviously, they are not exhaustive, though a much longer list easily gathered are quite exhausting.

Such pure craziness in a president and in a president’s followers first looks shameful and disgraceful, but as more craziness occurs becomes not just pathetic and risible, but boring and occasionally (out of desperation) something to make fun of, like announcing that the United States now has “the best economy in history” and “the greatest we ever had” just as another announcement restated America’s “highest debt since shortly after WW2” (as a % of GDP).”

Chasing all the daily, self-serving lies of this president as well as those of his followers (as the examples above), many of whom are or were otherwise intelligent, even judicious persons squanders considerable resources. The pursuit to see through dishonesty is a boring and wasteful engagement of millions. They (we) continue because it is not inconsequential that a president can seem determined to explore how low he can sink in integrity, thoughtfulness, and common truthfulness. It is vital to scrutinize a powerful man-child dragging our country down to his despicable level toward weakening the rule of law and the growth of authoritarianism.

I began today’s rant with a quandary: To be behaving so corruptly, so hell-bent on taking America to at least the frightening border of tyranny, what on earth are Republicans thinking? The state of this nation could not be so endangered or the republic’s stabilizing framework so challenged without Republican complacency and endorsement. Americans who are not Trump’s sycophants are at a disadvantage so far due to a Trump bootlicker Senate and fourteen months until a possible turnover in the White House. It troubles me that we—or more personally, I—have so little to offer except to put a name to the dark clouds over America with what will seem at first to be amateurish hyperbole, though not words without meaning, to wit:

Republicans have entered into a conspiracy with Donald J. Trump, a written, spoken, or implied conspiracy. . . . .

I am a U. S. citizen living in Atlanta, Georgia, having grown up in Chattanooga, Tennessee, and graduating from Chattanooga High School. I served in the Electronic Security Command of the U. S. Air Force before receiving a B.S. degree in business/economics and an M.Ed. in educational psychology, both at the University of Tennessee at Chattanooga. I then completed a Ph.D. in clinical (and research) psychology at Emory University. I have two daughters and three granddaughters. An ardent international traveller, I have been in over 70 countries for business and pleasure. My reading, other than novels, tends to be in history, philosophy, government, and light science. I identify philosophically as a secular humanist, in complete awe of the universe including my fellows and myself. I am married to my best friend, Miriam, formerly of the United Kingdom and Canada.
View all posts by John Bruce Carver →
This entry was posted in Politics. Bookmark the permalink.

6 Responses to The Republican conspiracy