Having been sidelined by despondency over America’s unraveling present and conceivably dystopic future, this is my first post in just over six weeks. My gloom—not to mention that which you’ve endured—is, of course, only an infinitesimal bit of what Donald Trump and his Republican collaborators have wrought. High crimes and misdemeanors are an exhausting mix, even beyond reading tweets, counting lies, or comprehending clumsy, unprofessional actions. His slapdash and amateurish behavior even when dealing with critical circumstances include transactional decision-making in the absence of strategy, harshly criticizing and judging subordinates upon criteria only ambiguously given if at all, and failure to integrate available expert knowledge into decisions.

Most if not all senators and representatives of the president’s party would in normal times find his behavior deplorable and intolerable, creating an unacceptable endangerment of the republic. But that same party has been willing to carry Trump’s water all the way to the edge of autocracy, an edge that beckons Trump daily. I charge Republicans not with unpatriotic intent but with recklessness and political protectionism that together have the same worrisome effect. 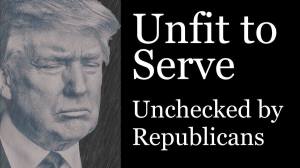 The presidency requires proficiency in hiring and laying out performance expectations of numerous high-level managers who themselves must further delegate and set expectations. The number of levels in the federal government are far greater than in the largest of corporations, further complicated by entanglement of matters both political and managerial. Yet Trump’s managerial competence would be insufficient in even a very small organization. This has been true, of course, of other new presidents. However, in this case a self-professed claim to need no education (he knows “more than the generals”) renders his ignorance especially alarming. Further, he is a wellspring of blunders due to pathological narcissism, inability to admit mistakes, and being frequently unhinged over even slight opposition and personal challenges. Moreover, he fails to exhibit a moral center, an ethical base to palliate his otherwise deficient self-control and strained dealings with subordinates.

Voters often mistakenly assume that experience as a “business person” automatically includes managerial expertise. It does not. It does not particularly if management is exercised through several levels of organization (the Trump companies did not). Although managing even one level of subordinates is improved by skilled delegation ability, further levels demand it. That is reflected in the emphasis given by many management scholars to summarize management so similarly, to wit: “The art of getting things done through people”—Mary Parker Follet. “The art of getting things done through others and with formally organised [sic] groups.”—Harold Koontz. “I look for people who can get things done through other people.”—Sam Wyly.

Of interest in the Trump context, the next sentence in the Wyly quote is, “The most important thing for a good manager is that the people on his team feel like he or she has integrity.” That sentiment was also emphasized by “the father of American management,” Peter Drucker, who warned that a corrupt boss produces corrupt subordinates. Trump’s personality is given to rapid changes in directives, blaming others for his mistakes, expecting subordinates to protect him from his own quirks, and frequent unbalanced rage, and mendacity—in short, a lack of interpersonal integrity that produces great organizational stress and further proliferation of that shortcoming throughout lower levels.

For a constitutional democracy to work, honorable men and women, when elected, must not only maintain their personal integrity, but the integrity of the constitutional system and rule of law as well. The most perfect and clearly written broad commitments on paper—like our Constitution—are necessary but not sufficient, for they are unable to survive on their own. Ben Franklin’s warning (“a republic, if you can keep it”) requires officials’ deeds to studiously fit those words.

Still, even more destructive than a president’s inability to administer with precision through multiple levels, the most crucial irresponsibility would be to jeopardize the Constitutional integrity of the United States—that which protects us from becoming the tin-pot tyranny our Founders feared. Thoughtlessness about our founding document yields damage to the very basis of governmental roles at the top end of government structure, an impairment shockingly perpetrated by the Senate during the Trump presidency. The guiding consideration should not be whether Trump deserves impeachment and removal from office, but whether America deserves to have the integrity, wisdom, and transparency of government that its Constitution—if not violated in word or deed—provides.

As I posted here nine months ago [“Risking America,” Jan. 3, 2019], political disagreements about normal partisan politics are the sort that politicians regularly struggle with—like agriculture subsidies and military budgets. I’ll call those “event decisions” to separate them from “system decisions.” The latter constitute the framework of authority, roles, values, and philosophy within which all event decisions are made. Some event decisions are crucially important. All system decisions are.

It is critical for any actor or body to recognize when he, she or it drifts into system decision territory, for otherwise the system may be modified without due care. For example, if senators come to be engaged more as the president’s apologists or even the president’s enablers than is their the proper (that is, Constitutional) role, they will have initiated an unspoken alteration of that role, making an implicit system change absent the recognition of having doing so and the care such awareness would stimulate. When such carelessness constitutes an abandonment or inattention to its proper role, some feature or Constitutional protection will have gone unfulfilled, an important obligation uncovered.

Consequently, maintaining a “government of laws, not of men” can only work if the “men” involved constantly act with self-imposed fidelity to those laws. Failure in that allegiance assaults the roots of the republic. Deterioration in one branch’s work affects more than its own performance, but that of at least one other branch. The greater the deficiency, the more the resulting deterioration of the system as a whole, for weakening one strut of government causes untoward strengthening of another strut. The more the Executive Branch acquires unconstitutional strength, the greater is the risk of totalitarianism. On a smaller scale, Republican senators and representatives who find their voice only when they near retirement are indicators of a severely cowed Legislative Branch.

I am not contending here that the United States will descend into an actual dictatorship, only that a number of pre-dictatorship behaviors have already occurred and continue to occur, with no clear curbing of the trend. I’m not charging that Republican apologists for Trump want a dictatorship. I am saying that during Trump’s administration the party has been willing to risk innumerable assaults on the rule of law and on established norms of protecting the integrity of American government. Is that just a slight risk? Perhaps. But even a slight risk carries massive weight when the downside would be catastrophic.

Trump’s behavior beginning with 2016 has degraded further with each month. Remember when most people found Trump’s not being “presidential” to be his chief flaw? My, what naïve children American voters have been . . . and to watch his televised campaign events, a few million still are. What will be the next of his steps toward despotism? At each stage we’ve thought he had gone toward madness as far as he would, but each step only promised the next.

As the calendar moves us closer to the 2020 election, expect even further of his attacks on the America whose trustworthiness and thoughtfulness we and the world had come to expect, even depend on. What form will America’s deterioration take in the coming months? Americans have no reason to believe the current state of affairs will right itself without major alterations, largely by Republicans. We may be seeing early signs of that now, though at this stage Republicans are showing only sporadic, weak moves to save America from its president. Fox News is showing small reductions in its slavishness and misrepresentations. These changes must occur soon lest we move even closer to the point of no return from authoritarianism and Constitutional deterioration.

President Donald Trump and his subordinates comprise the most corrupt administration in the history of the U.S. presidency. As to our vaunted “checks and balances,” in the Legislative Branch, the Republican Party has seemed to have no limits to how far it would go in denying and covering up inept, unethical, indecent, dishonest, and dishonorable behavior of that administration or of itself. In short, the Republican party in the House and Senate, and obviously the White House, has endangered American security, refused to protect integrity of the ballot, taken aim against science, failed to correct lies spread by the White House, lying about then ignoring the Mueller Report, and other misdeeds.

I am happy to assume Republican senators and representatives care about their country, but since January 2017 they have acted as if they do not. Now, for the first time in history the United States has leaned toward authoritarianism. While the country needs the balancing effects of a respectable conservative party like we have had in the past, it is not clear that the present Republican Party—as degraded as it is—can rise to the challenge of avoiding further deterioration of governmental integrity, nor can it be trusted with any role in the federal establishment for possibly years to come.

I am a U. S. citizen living in Atlanta, Georgia, having grown up in Chattanooga, Tennessee, and graduating from Chattanooga High School. I served in the Electronic Security Command of the U. S. Air Force before receiving a B.S. degree in business/economics and an M.Ed. in educational psychology, both at the University of Tennessee at Chattanooga. I then completed a Ph.D. in clinical (and research) psychology at Emory University. I have two daughters and three granddaughters. An ardent international traveller, I have been in over 70 countries for business and pleasure. My reading, other than novels, tends to be in history, philosophy, government, and light science. I identify philosophically as a secular humanist, in complete awe of the universe including my fellows and myself. I am married to my best friend, Miriam, formerly of the United Kingdom and Canada.
View all posts by John Bruce Carver →
This entry was posted in Politics, Uncategorized. Bookmark the permalink.